Whew! It looks like I survived Play last weekend in Modena.

The new incarnation of ModCon, in the new location of the fair (which for us staying at the Holiday Inn was ridiculosly handy…), has seen me as “the Don’t Rest Your Head demo man” for two days straight with me GM-ing games of our italian edition (Non Cedere Al Sonno) to a good number of very interested players.

Some of them came to the demo with the game already in their bags, having bought it before even trying it, and I personally count that as a small win: our reputation is at the very least good :)

I seated some 20+ people for games of two and a half hours (roughly) where I would explain the whole system and game, and then go ‘round using our pregen characters (plus the odd fifth one created on the spot, in case of 5 persons groups). I think I can safely say that all of them had a good time.

Heck, I had a good time GM-ing the game.

I’ll post here some small actual play vignettes to demonstrate the level of gonzo/rockstar action a player completely new to the game can pull out in a couple of hours: Diesel (the rocker from the book, Fred’s character) stopping a train with the power of ROCK! Ok, more or less.

He was stuck in a dark tunnel, suddenly having railroad tracks in it. Diesel’s (player’s) comment: “Oh crap.”

Instead of running away he turns, slings forward his guitar, activates the Rythm Nation Madness Talent and ‘gets’ the hidden rithm in the trains noise. Then he starts performing that same rithm riffing on the guitar, doing a quick “Rallentando”.

The player tosses some 5 or 6 madness in the roll, gets a whopping 8 successes, AND NO SIXES!

The train stopped touching Diesel, knocking on his back on the tracks.

Another vignette: Luk, the kinda depressed clown character a player had created on the spot, had the hidden desire to be an acrobat (but was overweight). His Madness Talent, guess what, was practically “matrix/wuxia acrobatics”.

Being chased by a fanged White Clown and a fire whip cracking lion tamer he activates his power for the first time, jumps on the branches of the nearest trees and proceeds (again with an incredible number of successes rolled) to jump from branch to branch like a fricking ninja with oversized shoes.

Last thing: my “Vandemar” lookalike tries to punch Alia the tough female cop in the face. The player does not even hesitate: “I turn to stone and headbutt his fucking hand!”. She/he won, obviously :) 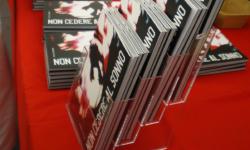