Ok, this is a bit of a departure from my usual hobby models. It’s a “metal kit”, similar to the “Metal Earth” kits (often spaceships from various franchises, or famous monuments), only… It’s huge. 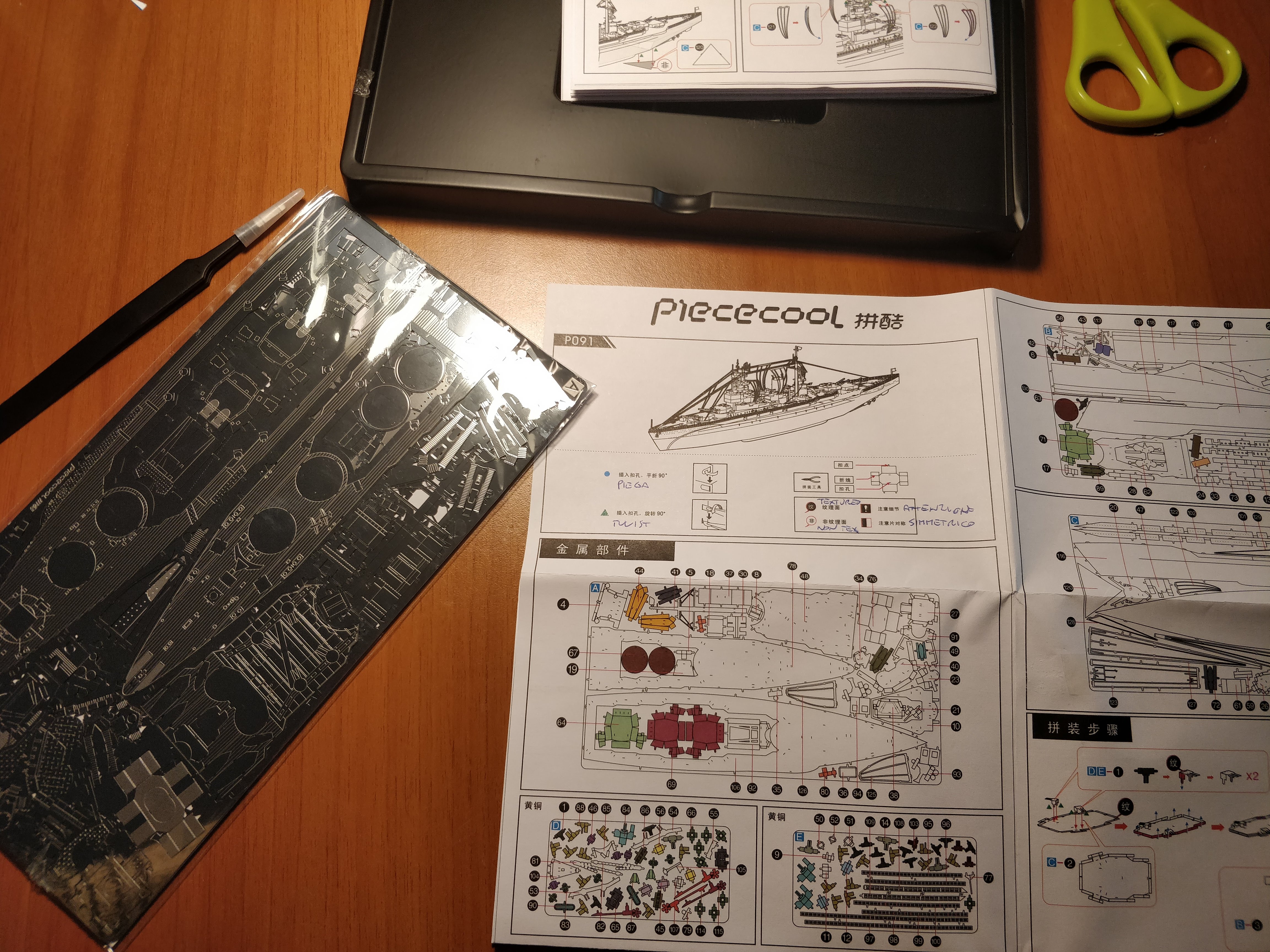 Made by a Chinese company, it’s basically a kit that you build by cutting parts from metal sheets that were mostly pre-cut with lasers (and etched, and possibly even colored) with wire cutters, folding and bending them following instructions, and then inserting tiny lips of metal through a slit and twisting it with pliers or other tools.

I have to admit, making some of the parts did make me swear a good amount… but thankfully I had some good tools, borrowed mostly from my wife’s stash: long-nosed, smooth pliers (from her jewelry tools) were absolutely vital, plus a pair of Xuron pliers she already used in the past to cut metal earth kits (you can see the points in the picture above), plus a couple of precision tweezers (that I normally use to place decals).

Instructions are on two folded A3(roughly?) sheets, on both sides, and while not perfect (and printed a bit small) they were better than I expected: parts that have multiples on the sheets are color-coded so that you can find them on the metal sheets, and the two or three phrases in chinese were easily translated using the Google Translator app by pointing the phone camera to them (they boil down to basically “decorated side”, “smooth side” and “bend carefully in a curve”.

Only a couple of times I was lost about how I would have to fold or bend a piece. I did make a couple of mistakes (parts that were put together completely in the wrong direction… luckily they were mirrored parts, so I could just re-do the same error and they did fit… albeit in the wrong side. Nobody will ever notice). And I broke a part (again, because I had bent it the wrong way, and bending it all the way in the other direction, the bending line (which is scored, and sometimes perforated) gave. A bit of CA glue and a lot of swearing mostly fixed it: you would not find the part by naked eye, probably even paying attention and up close.

Many of the (tiny) details are just barely suggested by the shapes: it is, after all, a kit made entirely from flat metal bits, but the decorations and carvings make the parts much more visually interesting!

And, yeah, the cannons were special parts, thankfully: rolling up metal to make those would be impossible.

All in all, I’ll call it a positive experience. I learned a lot. I had my sessions of “model therapy” (not gunpla this time, but still helping keeping me sane in stressful times), the finished model looks pretty amazing and it’s huge! 31cm in length!

Bonus points… these kits are pretty cheap! 20 bucks on Aliexpress, or even less if you order during some promotion (but I see they can be found elsewhere: just search for “Piececool Metal Kit”)!