Cundijùn (see below for pronunciation) is a very simple recipe that comes from my native region, Liguria, and even more specifically the western part of Liguria, commonly known as the Riviera dei Fiori. Yeah, that Riviera, the place where the word comes from. As any foreigner that has ever spent more than 5 minutes talking with me already knows, Italy is a land of dialects… that are actually different neo-latin languages for all intents and purposes. So, “Condiglione” is the Italian official approximation of the original Ligurian name, while “Cundijun” (koon-dee-YOON, roughly) is my best approximation of the Ligurian name in roman characters (dialects generally don’t have a written form) as it is pronounced in my town and vicinities (dialects also have wild pronunciation differences, even when moving only a couple of kilometers). But anyway, linguistics aside, here is Cundijùn: it’s a salad, simple as that. It’s often mentioned as similar to the Nicoise salad (not surprisingly, since Nice was part of the same region and their local dialect is Ligurian, not French), but eh, they’re not that similar. I’m not going to provide precise measures for the ingredients because I’m a terrible cook and because nobody ever weighs the ingredients of cundijùn. Go by heart. Bear in mind that this is one of the myriad of variants of the recipe: many also like to add thin red onion slices, salted anchovies, salted capers, olives and so on.

Wash your ingredients and gather them around. You’ll need a largish bowl to hold your cundijùn, a knife and a cutting surface. Put the eggs in water and hard-boil them.

While the water for the eggs heats up, start cutting your tomatoes in pieces. I feel it’s better if you don’t make slices with them. Just cut them in pieces roughly the shape of an orange segment, maybe cut even that in half, better if you work over your bowl so you’ll catch all the juice that drips.

Spread a pinch of salt on the tomato pieces, then mix them a bit, then put another pinch (to taste, clearly).

While the tomato rests and drips its tasty juice, aided by the salt, gather the basil leaves, remove the hard stems (if any) and cut them in slices, transversally, roughly half a centimeter wide. If you want to be extra accurate to local custom, break the leaves with your fingers: cutting basil can stress the leaves a bit much.

Add the basil to the bowl, mix. Now add a generous amont of Olive Oil. You don’t want to drown your salad, but you do want all the bowl’s content to take some oil, and you definitely want the bottom of the bowl to gather a good amount of juicy mix of tomato water and oil.

Don’t forget you got the eggs in the water, btw: take them out and place them in cool water or you won’t be able to handle them. Also: you want them cool for the salad.

Again, take the peppers and cut them in slices 0.5 to 1cm across (removing the seeds and the white bits from inside, clearly). Add them to the mix.

By now the eggs should be cool: remove the shells and cut the hard boiled eggs. Here comes the trick (for my personal taste) to a perfect cundijùn: take the firm yellow egg yolk, reduce it to small bits and spread it in the salad. Now add the white bits and mix again, thoroughly.

You are pretty much done! Let the bowl rest for a bit so that the tastes amalgamate nicely and the juices flow a bit, then enjoy!

A word of wisdom: you’ll want to have bread handy when you eat cundijùn. Trust me. Soak the soft bit of the bread in the cundijùn juices. It’s heavenly. Heck, it’s probably my favorite part of it.

So yeah, it’s a tomato salad. No big deal :) It looks like a messy bunch of ingredients thrown in a bowl… and it is! In my dialect when something is a wild messy mix of things we say it’s “a bit of a cundijùn”.

It’s probably the quality of the ingredients that make the dish, and it’s, let’s say, culturally part of my upbringing. And, it’s perfect for hot summer days when you don’t really want to cook because the idea of fiddling with hot pans is enough to make you swoon.

Note: this is a repost from my g+ account. 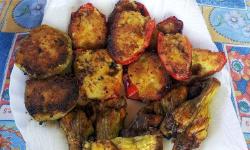 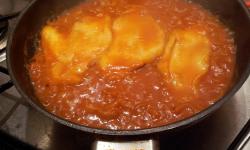 Recipe: Plaice with curry and onions