A stab through the heart…

This show continues to handle its politics in a very modern and adult way: Rustal, the authoritarian power, went straight to Nobliss, the capitalist behind the curtains, to gain complete control of the media. It’s not new, that was what they did with the workers revolt in S1 too.

Because it’s not enough to beat your enemy. You have to show the “public opinion” your use of Power is just, righteous and lawful.

The gang is discussing their options, and Orga is determined to keep them alive; it doesn’t matter if they need to run, and run: if they stay alive, they win. And unexpectedly there’s a new plan, the tunnels. A new glimmer of hope.

Nice little moment with the senior Tekkadan kids (Dante, Chad, Aki and Eugene), with Eugene thinking “as long as Orga is leading us, it’ll all work out”… argh.

And as a nice counterpoint, McGillis saying “you’re not the Tekkadan I knew”… yeah man, they got a bit smarter. And they don’t want to change the world, they want to survive.

McGillis seems, instead, to have completely embraced the Doomed Hero mantle: he offered to open the way for Orga, but only because it’s part of his gamble involving trying to kill Rustal. I have little hope for THAT plan.

Kudelia now has a new family. Atra. And Mika. And the unborn child (assuming Atra is actually pregnant): she’s taking the task to protect her new family seriously. Aside: the fun reaction of Chad and Merribit at the news… but also Merribit stating poetically “the iron flower won’t wither that easily”. Even Merribit has been changed: some of the drama and drive of the kids rubbed on her :)

Love how Mika interrupts the “lofty hero” speech of McGillis right when he’s saying he’s got no ideals, no vision. “You talk too much”. He does have an ideal: he needs to “get there”, to the place with no war where they’ll be able to live. McGillis has an ideal because he wants to be the center of a Great Dream. Mika has an ideal because he wants to be nobody, he doesn’t need to be the Great Hero. He wants to grow potatoes and flowers and leave a legacy of life to his descendants.

And the subsequent exchange between Mika and Orga: “I don’t know what mess you’ll do if I’m not with you”. :)
And the gun. The same gun after all those years.

And then we get Iok being an ass as always… he found McGillis in the wrong mood though. Not sure he’s definitely dead yet.

The call with Makanai had a really charming moment, how he’s coyly hinting that Tekkadan’s predicament is making his employee nervous… and it’s Takaki! Lovely little moment seeing him back. And his surprise at hearing Ride in what’s clearly a “top level” mission/group.

Then we get the email from Azee. Honest: seeing Azee in the white suit and fedora made me tear up. I even mistyped her name as Nazee once :) Many pheels!

I loved the little moment between Orga and Kudelia: “I chose you because I wanted to work with unprivileged kids of my age… *chuckle* I was so arrogant!” Yeah, they all grew a lot.

All this “hope rising” had me worried already… when Ride remarks “It’s so quiet” I got a genuine sense of dread and impending disaster. I feared a car-bomb… and right on cue. An ambush.

Ride’s first reaction is “no, what are you doing!”. “I’m the Boss of Tekkadan Orga Itsuka. This is nothing to me!”
Ride: “Not for me…”

Fuck (and again the end song starting at the right moment to stab me through the heart).

“As long as you all don’t stop, I’ll be at the end of it waiting for you. So hear me well, don’t ever stop.”

Those shooters were Nobliss’ men, I’m sure. Who knows if he’ll get the retribution he has clearly earned…

And the preview. There’ll be battle. It won’t be pretty.
Eugene crying. He’s no longer the Deputy Boss I guess… And the white Unicorn IO Shiden. It was meant to be Orga’s mobile suit. I really hope it’s Ride in the cockpit, giving hell to Gjallarhorn.

The title of the episode will be “McGillis Fareed”. I guess we know who’s dying next episode.

“Oh yeah, Atra asked me about the name for the baby… I guess I’ll ask Orga when he gets back”.

Thanks writers, keep stabbing at me up until the last frame… 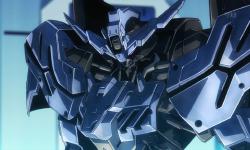