If you ended up here, you have probably expressed curiosity or interest towards the gunpla hobby. First things first, a caveat: I’m far from an expert. I’ve been tinkering with gunpla for 2 years now. I’m a noob, with a limited experience and technical ability… but that’s ok, I like my hobbies inclusive and I like to explain stuff. There will always be time to learn more from more experienced people. Also, I’ll use my crappy photos where I can, pardon the poor quality.

So what’s a gunpla?

Gunpla is a Japanese contraction of “gundam plamo”, and Plamo is again the Japanese contraction for “plastic model” (the Japanese sure love their portmanteaus). So a gunpla is a plastic model of a Gundam. The answer to “what’s a Gundam” could be complex, and best left to another post… but in short, it’s a giant robot (or, rather, a giant humanoid shaped war machine piloted by a human). So the gunpla hobby is simply a branch of the modeling hobby, roughly in the big area comprising historical plastic models (planes, tanks, ships) and other static models. Other kinds of modeling are dynamic (R/C models of cars, planes) and trains. Obviously the hobbies can overlap… for example, many of the techniques are the same when working with plastic, and some of the ones used to make dioramas are useful across the board (except for dynamic stuff). We build scale versions of giant robots. Yep.

Grades and Scales and… what?

Gunpla proper are made by Bandai, a Japanese company that also owns Sunrise, the company that have produced dozens of anime shows and manga in many different universes about Gundam (among other stuff). They’ve been at it since 1980, and the modeling hobby was what saved Gundam (the TV show had pretty bad viewership numbers in 1979). Bandai has constantly improved its plastic molding process. What started as barely articulated robot figures in one single color of plastic, needing glue, paint, and a good amount of modeling skills, have constantly evolved. Bandai actually holds several industrial patents about plastic injection, and they have a strong drive towards perfection (but that might just be a Japanese thing). In these long years many of the same robot models have been re-released from time to time, with increasing quality levels. In the late nineties they actually started using an official way to codify those levels, calling them “Grades”, so as to allow different kits with increasing quality, but also complexity: on one hand, you know a 8+ yo kid will know he can snap together one kind of kit… and on the other hand, an older hobbyist will know they’ll find extra details and gimmicks in a more complex one. Good for business too: it’s a way to segment the market and have higher priced kits, too.

Gunpla kits are scaled down versions of fictional machines; in the fiction, the average height of one of these Mobile Suits is around 18-20m (60-66ft), so they have an official Scale, like a model train, or a WWII plane kit. Aside for odd cases, gunpla are sold in 4 main sizes: 1/144 (roughly the size of an action figure), 1/100 (roughly 30cm/1ft tall), and the bigger 1/60 and 1/48 (called Mega Size). Oh and there’s a whole other world of SD (Super Deformed) kits that are not to scale and have cutesy proportions: I don’t know much about them, sorry!

Started in the late 1990, it was the first Graded line, and comprising now literally hundreds of models, the High Grade line is the most common. Their quality has improved a lot with time, but even pretty old HG (High Grade) are completely snap-fit (meaning, they don’t need glue) and look very nice, with plastic in pretty much show-accurate colors (that is, they don’t need painting). They are pretty simple kits, and cheap (in Japan they sell for 8-15 USD), so that the young fans can get their start in the hobby. At the same time, they are well beloved by experienced modelers too, since their simple engineering and small(er) number of parts mean they are pretty easy to modify and customize. Almost all High Grade kits are, nowadays, in 1/144 scale.

more details, but later on they continued to improve, and especially since 2006 they are the “gold standard” of the Gunpla hobby, with full endoskeletons (called Inner Frames in the hobby), movable armor plates, mechanical details hidden even under armor, and so on. They range from 30 to… more than 100 dollars I believe. But rest assured, the price is always proportional to the amount of stuff you get in the box. They can be big and full of gimmicks, accessories and alternative weapons.

The name says it all: the PG kits are the luxury Limo of the Gunpla hobby. They cost a lot (200 bucks or more, generally), they are big (1/60 in scale), and are insanely detailed. Most also include accomodations to put in LEDs to light up parts of the kit from inside.

Put simply… the amount of quality and details and engineering and part/color separation of a Master Grade, but in 1/144 scale. These kits are the size of a normal HG, but can be superbly detailed. The level of engineering Bandai puts in them is surprising, and can be overwhelming.

In the years there have been other experiments and combinations: there are right now 1/100 “no grades” (as in, they are not officially Master Grade), in the past there were several 1/100 HGs and super simplified First Grades (with limited components and articulation), the Mega Size kits are basically huge HGs, and so on… nothing a newcomer should worry about, if not to avoid some bizarre kit they won’t like afterwards :) This post is already pretty long so I’ll continue in Part 2 “Building a gunpla”, later. 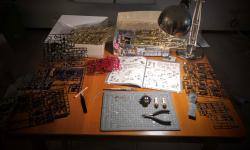